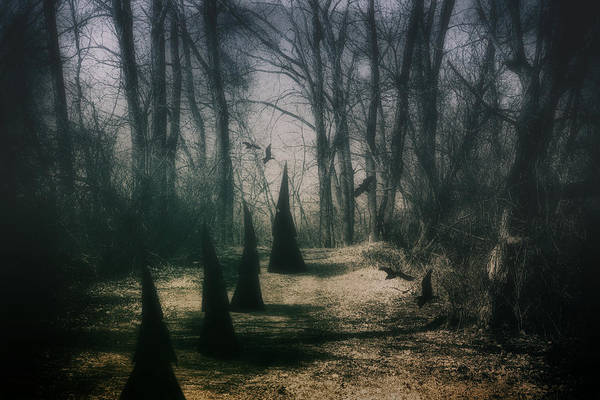 The coven, a tight group of witches akin to a sisterhood. It is an idea that came to mind but I do not know whether this would be well received, hence an interest check. When it comes to witches, the first few things I think of is gothic looking women picking flowers in a forest, muttering dark chants during the witching hour and just about to sacrifice a goat for that fertility spell her neighbor requested. While this isn’t exactly how things would go in a World of Warcraft setting, it is still possible to lean to an old school witch RP, where you cannot cast every spell without a herb or a mineral, you cannot locate someone without a personal item of their belongings and a map, or explode in shadowy energies on a whim. Possibly, this type of RP would lean towards subtle casting of spells, curses and alchemy. Because what kind of witch are you if you cannot mix a simple potion?

The base would start off as a simple cottage in the woods, befitting the theme rather well. The witches would need to gather resources to expand their quarters. Whether it be giving a few men seducing potions to obey her bidding or finding alternative means. In my opinion, this would function well with player interaction from other phases, where the witch would try her best to convince whoever to do some construction. Here is a sheet for a terrarium, an alchemical addition to the witchy building;

This is an example, but you can see from the beginning that it would not be served on a silver platter, which I for some reason find highly immersive. After this supposed terrarium was built, Witches could fill it with plants, insects, jars, whatever relevant comes to mind. This wouldn’t be an only addition, more would be added through the very same system, be it a living room, a library, a kitchen, so on.

These ranks wouldn’t function differently than in other guilds, they would be given in consideration of the effort a fellow witch has shown and invested to better the coven. This would elevate her above the others, allowing her to place work orders, be it chores, collecting ingredients and such.

Each witch will have the liberty to go about her spellwork as she pleases, but the progress would likely be tracked (up to debate) in order to keep a steady and balanced power-flow. For example, it could be simple so that a player posts Melinda had studied the invisibility tome in discord channel, and then a bot would be initiated to roll, which would determine whether the witch learned anything, something or nothing. Otherwise, it could be elaborate, including all sorts of modifiers such as natural talent, effort, speed of reading, studying conditions, day, night, so on.

This would depend on the area/or the guild/group or individual the witch had interacted with and whether she helped them or harmed them. If a player is tasked to collect souls for a ritual in a specific area, the coven would not be received well in that area. This is rather simple, but again, modifiers could apply such as how stealthy the witch was about her business, expertise, day and night, and whether the victim screamed or not, whether the carcass was found or was hidden and so on.

Things I am still unsure about, so I brought it here and ask those interested in the community to discuss:

I like the idea. Just posting to offer fair warning that a guild with too many intricate systems can be pretty easily overwhelming and sadly most haven’t survived long. There have been ‘build this city’ things before.

Still, bad ideas are just ideas waiting to be done right. The concept sounds fun, def look into getting some officers to back you up before a full launch.

Thanks for the insight, will keep it in mind.