As a disclaimer going into this, the initial reason for this ban request is due to the numerous people demanding action but not wanting to bother taking that step. Then after finding out Aleyn was conspiring with Aly to blackmail certain individuals in a bid for revenge, I’ve decided to take it further.

To begin with, the paper trail began with Goliath who at the time was 17. Though this fact can be disputed due to the age of consent in Goliaths respective state, it is known that Aleyn on a number of occasions would force him to ERP with her. It appeared they were in some form of relationship, which Goliath broke off after numerous discomforts made on Aleyns end. This appeared to result in a series of attempts to stalk Goliath during RP. Though again may not explicitly make them a peado, it shows some very strange and unsettling behavior from Aleyn.

However, another individual by the name of Bicmcnugget who, if Aleyns age is to go off anything, is 16. Once again mentions of forcing ERP onto a 17 year old are made, and sexual comments towards a 16 year old and attempting to ERP with someone who was in fact younger than Bigmcnuggets. Which implies that Aleyn was willingly involved in sexual activity with someone below the age of 16.

Bigmcnugget then goes on to state that Aleyn and Goli traded sexual photos of one another, though the claims are not concrete due to possible age of consent in Golis state, the previous screenshots seem to match up with their behavior, including Aleyn asking Bigmcnugget to watch their ERP sessions.

According to another minor who knew Bigmcnugget, Aleyn mentioned to them that they forgot to save nudes of Goliath, and then stated that he has 3 of her tit pics. Saucy. But by the looks on the youths face in the chat he clearly was extremely uncomfortable by it.

Moving on, a few more screenshots surface about the effect Aleyn had on Goliath through her forcing ERP on him and such and not respecting basic human boundaries.

Bignugget then confirms that they are 16, and brings up the fact that Aleyn RP’s as a neko cat character.

Below are a number of screens pertaining Aleyn sending ERP logs to Daddy Dar, who was cited as being 14 at the time. 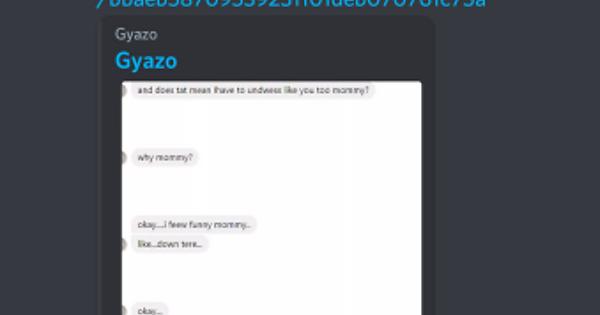 The next few screenshots in this album are of Aleyn on the character RinnaV and Uprutus on Hurmongreth interacting with what appears to be a child elf RP’er in Millneius’ bath house phase before Millenius ultimately stepped in to deal with it.

The screenshots show Aleyns character without any clothes alongside the child RP’er Ernest who also appeared to have none. This would imply the two were interacting with one another in the bathing area.

Ernests TRP. Following this Aleyn put their chars clothes on, with Ernest still being without any clothing before Millenius forced him to and warned him not to do so again.

And just for banter here’s a screenshot of Hurmongreth admitting in .an that Aleyn sent nudes to minors. At this monent Aleyn is also a member of his guild, God’s Demise.

Praise be Goudy to answer this with righteousness.

22 Likes
My Apology to those I had hurt